Happy 4th of July. Today is the day a man claiming to be “God” said San Juan will disappear. Assuming this man on Delta Airlines meant San Juan, the capital of Puerto Rico, True Strange News will be keeping watch on this city all day to report its vanishing status. Check back for updates all day.

The suspect “was aggressive and shouted ‘I am God! San Juan is going to disappear tomorrow. I came to save the world and I am going to end terrorism,’ and he also tried to enter the main cabin,” the statement said.

That’s it! San Juan has survived!! It is now July 5th in San Juan, Puerto Rico and the city has avoided disappearing despite a claim by “God” that it would do so. Congratulations to the millions of people in the city and surrounding areas. We hope you all had a great 4th of July.

Well only a few minutes now for San Juan to disappear in some way. Starting the final countdown…

3 minutes – nothing in the news…

2 minutes – almost there, no volcanoes, no space rocks…

I don’t speak Spanish really, just a couple words (as do most people in California, I’d guess), but I looked up how to ask if a place is still open, and then called up several restaurants on Google maps. Most didn’t answer or had a busy signal but I reached a pizza place in San Juan, Puerto Rico. A real person answered and she said yes, (Si) plus other things that I didn’t understand. 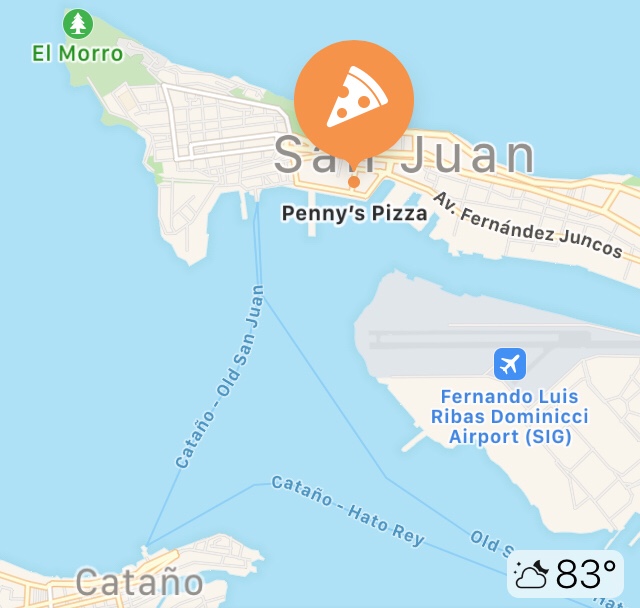 To me at least, this feels pretty convincing that the city of San Juan is still around and open for business. This city has just over three hours left to keep from disappearing.

A convincing bit of evidence, that the city of San Juan still exists, is the flight data into and out of San Juan airports today. Using a flight tracker app or web site, we can see that flights have been landing and taking off successfully. The latest landed just 10 minutes ago. This would be difficult if the city had vanished.

I don’t ask you to believe me that the city is still there, of course. You must draw your own conclusions.

It is now 7:15 pm for San Juan, Puerto Rico and the vigil continues. There are less than 5 hours left in July 4th 2019 for that city. I’ve been streaming radio from San Juan, Puerto Rico all day, and so far can report that the city has not disappeared. No telling when the actual photos were taken, but on Instagram, new photos up to this minute under #sanjuan show no vanishing of the city. This is from @utipodigital for example, uploaded 1 minute ago.

Most of July 4th has now passed and the city of San Juan is not yet gone. Here is a snapshot of a real time traffic map of Puerto Rico zoomed in to San Juan. 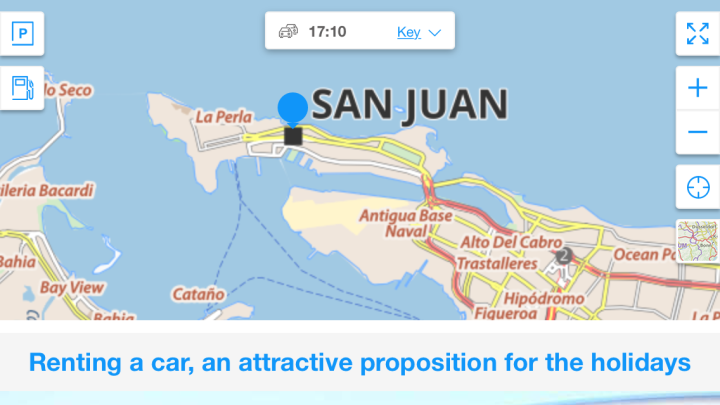 Okay, yes, there are 19 other cities named San Juan, but if “God” intended us to focus on any of the lesser known San Juan’s I’m convinced he would have said something. Let’s not get distracted. I’m keeping an eye on the big San Juan today. If any other city named San Juan disappears, we will probably find out.

Have any cities disappeared?

Yes, plenty. The town of Mexico Beach, Florida was almost wiped off the map by hurricane Michael in October 2018.

But as we’ve seen below, there are no hurricanes menacing San Juan today.

The violent eruption of Mount Vesuvius in 79 A.D wiped out the Italian city of Pompeii in an instant, but the closest volcano to San Juan, Saba, is listed as only “Potentially Active.”

No hint of any looming city destroying eruptions today.

Now wait, what if we are wrong in the assumption that by San Juan, “God” was talking about San Juan, Puerto Rico? Are there other cities named San Juan? It turns out there are 20 San Juan cities world wide.

There are 20 cities named San Juan in the entire world.

Amazing. It does seem like a God style move to be both dramatic and vague. We should check in on all of them today.

A 6.4 quake in the area of the Mojave desert in California at 10:33 am (1:33 pm San Juan time) has done no damage to the city, expected by at least one person to disappear today. 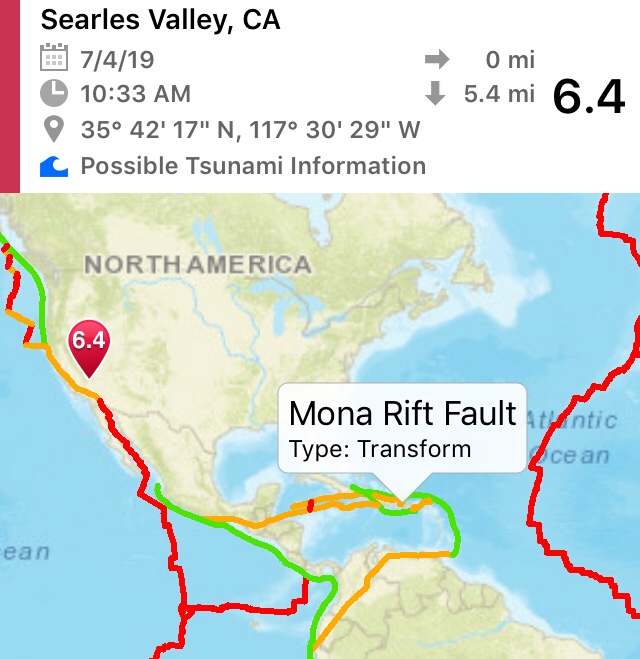 The closest fault to San Juan is the Mona Rift and the last bigger quake near San Juan was a 4.0 on June 29 of this year. 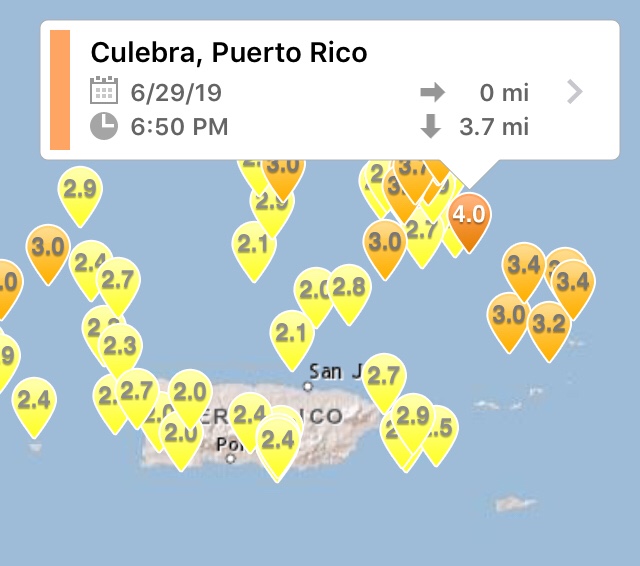 I’m still getting radio stations from San Juan and the city has not been destroyed.

Happy 4th of July! The city of San Juan Puerto Rico has not yet disappeared, making it so far through the entire morning. It is now 12:15 PM there, lunchtime. Radio stations continue to broadcast and nothing dramatic has appeared on radar. ( Accuweather) The weather underground does show some rain in Puerto Rico, but none in San Juan. 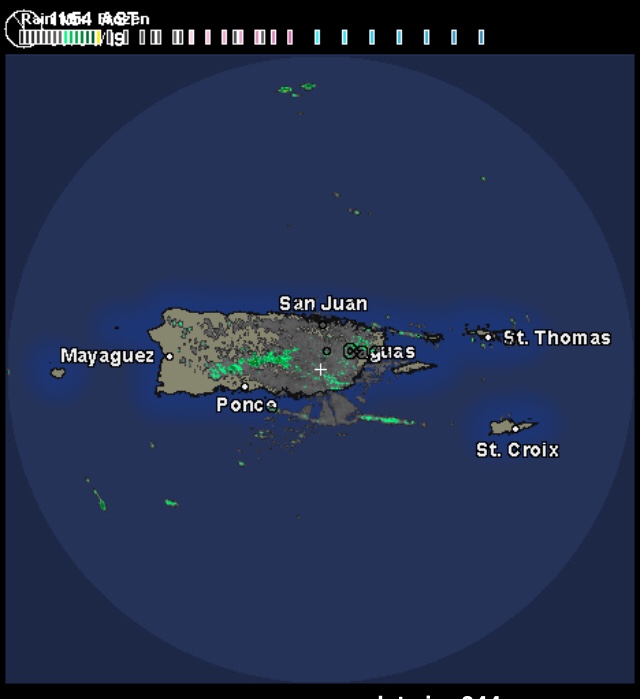 San Juan is still there. How might San Juan disappear? There are several ways the city could go, all highly unlikely. Hurricane Maria once devastated the Island of Puerto Rico, but there is no storm visible anywhere nearby.

Hurricanes frequently occur between August and October, although the U.S. National Weather Service considers the hurricane season for the North Atlantic Basin to run from June 1 to November 30.

The people could all just decide to leave. This has happened to many cities in the past: it is unknown why thousands of Mayan cities were abandoned, the fate of the Lost Colony of Roanoke is to this day unknown, and no one knows why the highly advanced Indus valley civilization abandoned its cities, for example. However, it would take is more than a day to abandon a city the size of San Juan without a major emergency.

San Juan could be wiped out by a huge tidal wave, and/or sunk by an earthquake. It may be targeted by advanced weapons of war perhaps by a Russian war ship visiting Havana. A space rock might fall on it destroying the city, or a space craft or satellite with a toxic payload might crash into it.

“God” did mention terrorism when saying San Juan would disappear, but as yet the world has never seen more than several buildings at one time be destroyed by that cause.

There hasn’t been a single Periscope broadcast today in that city and San Juan radio stations (see below to listen live) could be pre-recorded and all re-broadcast from elsewhere (highly unlikely), so another way to verify that San Juan has not disappeared directly is this call someone in the city right now. 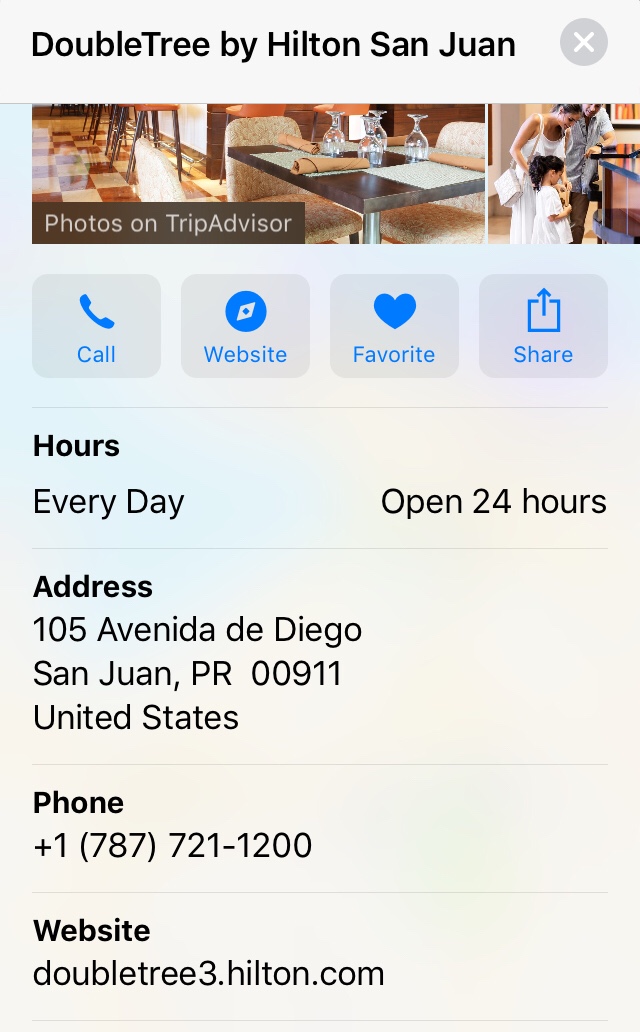 Verified: San Juan has not yet disappeared. I just called the Hilton hotel in San Juan and a live real person answered. The weather is good there, about 90 degrees, and a non-smoking room is about $179 plus tax tonight.

Another way of verifying San Juan is still there is the satellite weather radar of the area. The city is 3 hours ahead of California time, so as of 7 AM my time / 10 AM San Juan time, there were no major events on weather radar menacing the city.

The best evidence you can verify yourself that San Juan has not yet disappeared is that several radio stations are still broadcasting as of this moment. You can check on the vanishing status of San Juan in this way on streema.com.

How can we, who are not there, know that San Juan has not vanished? The last live broadcast from San Juan on Periscope was yesterday, July 3rd, 2019:

This was an hour long broadcast by Gustavo. In it he is driving around with someone else listening to some local music speaking about something in Spanish as night falls.

This is good evidence that San Juan was there yesterday.

There are a number of live broadcasts from the San Juan area still on Periscope, but none today so far.

Visitors to San Juan, while it still exists, can walk the cobblestone streets, see bright candy coloured homes, explore scenic waterfronts, centuries old forts, museums, charming plazas, and according to some, excellent restaurants. Here are some aerial views of this city which has so far not vanished: 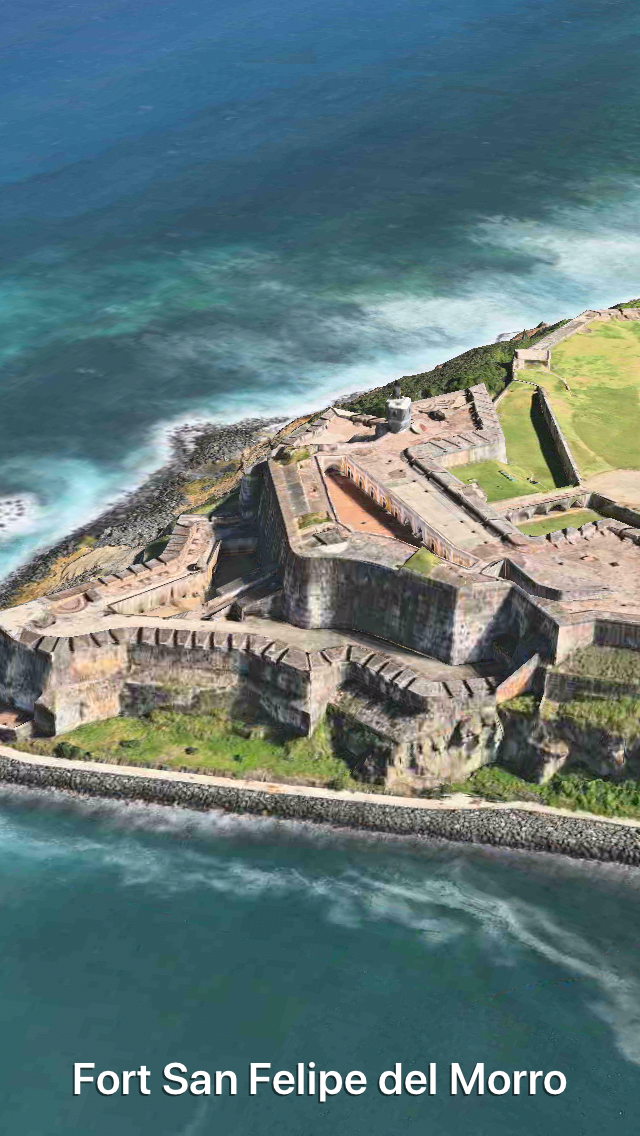 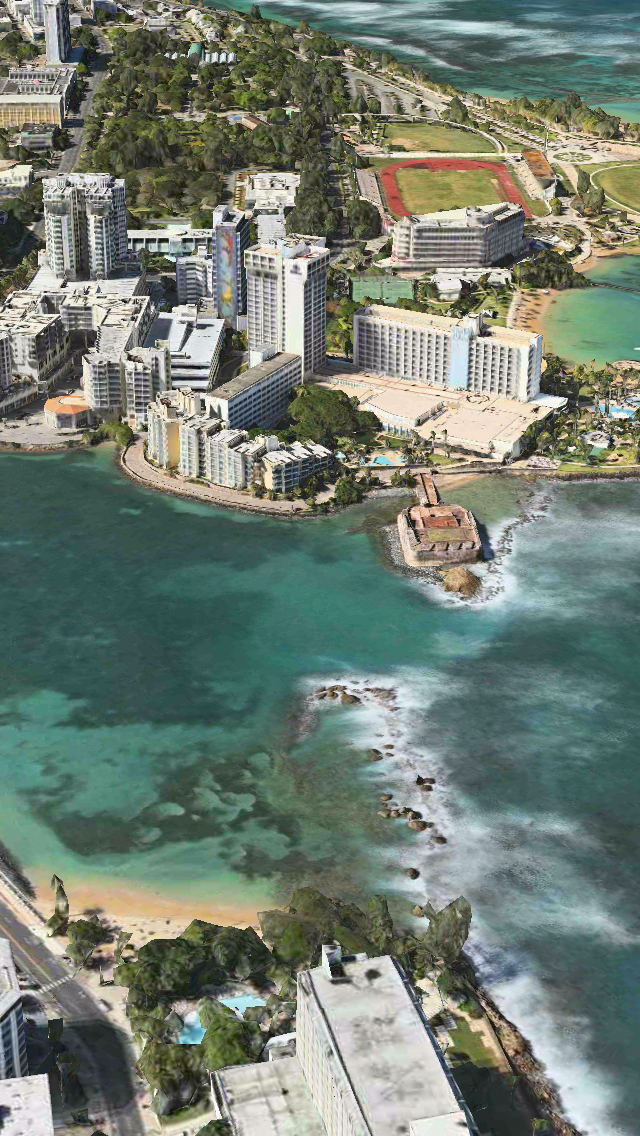 Stay tuned for updates all day of the possible vanishing of the city of San Juan.

The city was named for John the Baptist a fact with which God would no doubt be familiar.

John the Baptist is mentioned by the Jewish historian Josephus[18] and revered as a major religious figure[19] in Christianity, Islam, the Bahá’í Faith,[20]and Mandaeism. He is called a prophet by all of these faiths, and is honored as a saint in many Christian traditions.

Is there some tie in between the man saying he was “God” and then naming a city with a religiously significant name as one that would vanish?

I’m personally hoping it does not disappear. The current population of San Juan and surrounding areas is about 2.3 million people. It is the most populous municipality in the Commonwealth of Puerto Rico, an unincorporated territory of the United States. 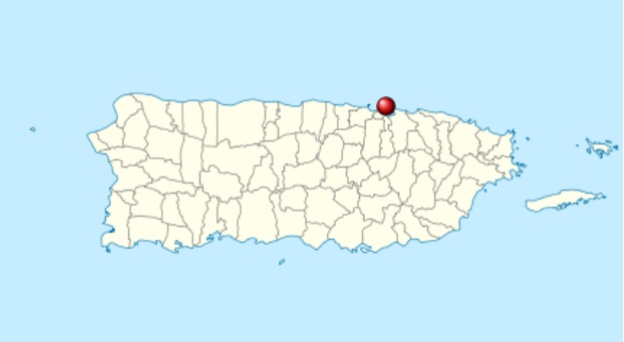 A claim by a man who got unruly on a Delta Airlines flight was made yesterday that the city of San Juan would disappear. Where is San Juan now? First, you should know where this city is currently. Here’s a map showing the location of San Juan. 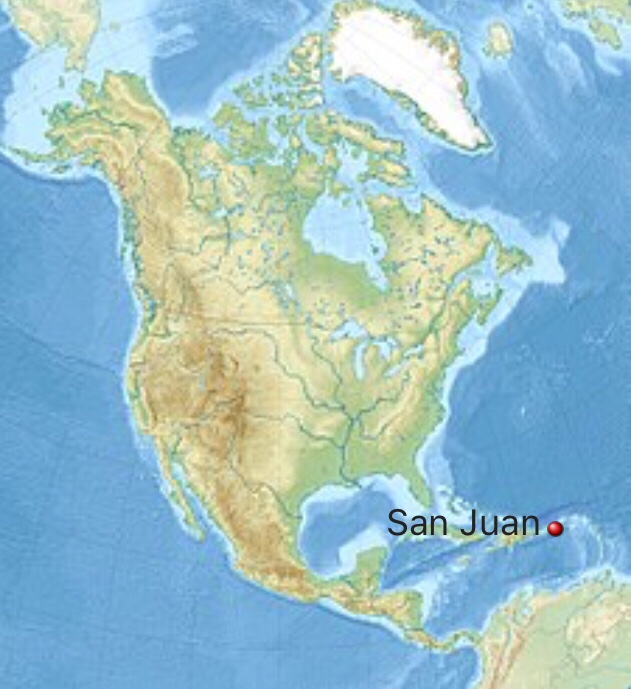 Stay tuned for updates as we watch to see what happens.