The scale of the universe is mind-boggling. Within that boggle is a strange fact: the largest “structure” we have observed in the universe is so large that it should not exist according to current science. The largest structure (so far as of March 29, 2019) is the “Her-Cr Great Wall”.

Why should this sheet-like group of galaxies not exist, though? Well, the universe’s maximum light travel distance is supposed to be only 13 billion years. With the speed of light is a constant and given the known expansion rate of the universe, the Her-Cr Great Wall structure should not have been able to become 10 billion light years across and also 10 million light years away from us because that adds up to more than the distances possible in our understanding. This assumes everything started in the same place with the big bang, because everything else astronomers have observed seems to support that concept. 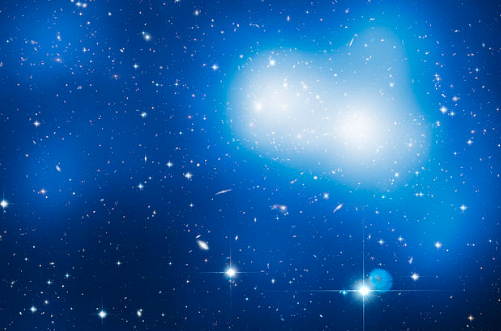 “The Her-CrB GW is larger than the theoretical upper limit on how big universal structures can be,” Dr. Jon Hakkila, an astrophysics professor at the College of Charleston in South Carolina and one of the astronomers who discovered the structure, told The Huffington Post in an email. “Thus, it is a conundrum: it shouldn’t exist but apparently does.”

A now dethroned previous record holder was the LQG at 4 billion light years across, which was stunning itself when discovered:

Astronomers have discovered the largest known structure in the universe – a group of quasars so large it would take 4 billion years to cross it while traveling at speed of light. The immense scale also challenges Albert Einstein’s Cosmological Principle, the assumption that the universe looks the same from every point of view, researchers said.

The findings by academics from Britain’s University of Central Lancashire were published in the journal Monthly Notices of the Royal Astronomical Society and reported on the society’s website … This newly discovered large quasar group has a dimension of 500 megaparsecs, each megaparsec measuring 3.3 million light-years.

Because the LQG is elongated, its longest dimension is 1,200 megaparsecs, or 4 billion light-years, the society said.

That size is 1,600 times larger than the distance from Earth’s Milky Way to the nearest galaxy, the Andromeda.

“While it is difficult to fathom the scale of this LQG, we can say quite definitely it is the largest structure ever seen in the entire universe,” Roger Clowes, leader of the research team, said in a statement. “This is hugely exciting – not least because it runs counter to our current understanding of the scale of the universe.” …

via Astronomers discover largest known structure in the universe | Reuters.

This animation explains the situation with measuring distances in an expanding universe:

This is the problem of defining a distance in an expanding universe: Two galaxies are near to each other when the universe is only 1 billion years old. The first galaxy emits a pulse of light. The second galaxy does not receive the pulse until the universe is 14 billion years old. By this time, the galaxies are separated by about 26 billion light years; the pulse of light has been travelling for 13 billion years; and the view the people receive in the second galaxy is an image of the first galaxy when it was only 1 billion years old and when it was only about 2 billion light years away.

In short: things can not move faster that light by theirselves, but they can move faster than light due to universal expansion. The more far away, the faster they go away.

… space is expanding everywhere in all places, and as a result distant galaxies appear to be expanding away from us faster than closer ones. There’s just more “space” to expand between us and them in the first place.

So, here we are in an expanding universe. What are we going to do about it?

Thank you for enjoying things like this with me.